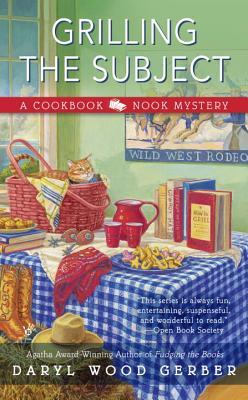 This is book number 5 in the Cookbook Nook Mystery Series, Grilling the Subject.  The sleuth, Jenna Hart, finds herself investigating the death of an obnoxious neighbor to clear her father.  Along with the murder investigation, a Wild West Extravaganza is in town adding to the drama, Bailey is in the midst of wedding planning, Jenna and Rhett’s own relationship is heating up, and finally, is  someone following Jenna?  If so, why?

The murder plot is well done and has plenty of suspects and clues to keep you guessing, but Jenna’s personal life is equally important in this outing in this series.  Jenna Hart has shown a great deal of character growth since this series began, as have some of the other recurring characters.   It has been a lovely series to read  and get to know the characters over the course of time.  Highly recommended cozy mystery read!