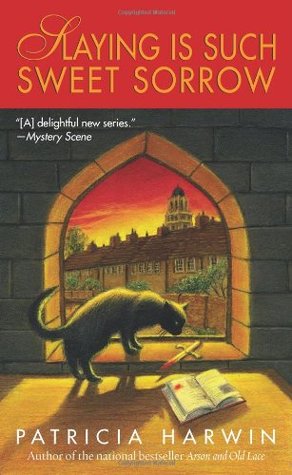 This is the second in a series, I was mislead by the tagline on the front saying “a delightful new series”   and thought it was a first.  There were some references to events from the first book, but nothing that inhibited me from enjoying this one.

I loved this book. The heroine was great, a woman trying to recover from the total upheaval of her life which was caused by an unwanted and unexpected divorce after 30 some years of marriage.  There are shades of Agatha Raisin in her and I adore that. The English village and Oxford  were fun settings, as others have pointed out there are some discrepancies, so perhaps not 100% authentic but not enough to distract me.

The mystery was well plotted with twists and turns even after a seeming resolution.  Catherine is drawn into the murder investigation when her son in law is accused with some very persuasive evidence.  She investigates because others seemed just convinced that the evidence is overwhelming.  She is also navigating the mine field of dealing with her ex-husband and “the other woman”.  In the end, the threads are neatly tied up and then there is a hint of the book to come.

I would highly recommend this one and I am going to buy the first to read from this series,  Arson and Old Lace.  Unfortunately, after this book the publisher would not publish the third and so there are only 2 books in the series.  I also believe that the author has since passed away in 2015.  It is sad to see that there will be no further visits to Far Wychwood.

Still staying in Oxford, I also read The Dead of Jericho last night, book 5 in Colin Dexter’s Morse series.  I love Morse, as bull headed and antagonistic, as he is, there is just something about him that I really enjoy in these books.  The Jericho in the title refers to an area of Oxford, in which the murder takes place.  Morse finds himself somewhat personally involved with this murder because he knew the victim and had in fact been recently to the house.   Morse walks a delicate line trying to solve the case without implicating himself.  There is a nice complexity to the plot here, with some mistake in identity, red herrings, and the victim’s actions in life adding to the mix.  Another good outing in the Morse series, which is on my shortlist of series to finish this year.