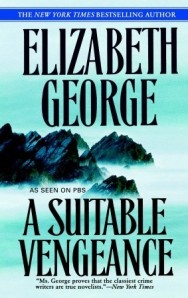 This is the fourth in the Inspector Lynley series.  The series that the PBS TV series was based on.

This is a mystery/romance/other fiction all in one and equal parts of each.  The plot does involve a murder, but the other elements of the storyline could hardly be called subplots, as they contribute equally to the book as a whole.  Many of the cast of recurring characters are here,  Lady Helen, St. James, Deborah, and Lynley are mainly featured.  For people following the series and the friendship of St. James and Lynley, this book is a pivotal one in an excellent series, as it is actually a prequel.  It showcases events happening prior to book 1 giving readers of the series the back story of the series’ characters.

This series is criticized as creating a romanticized and unrealistic view of the British Upper Class and I can understand that critique.  However, I enjoy this world that Elizabeth George has created and her characters and it is, after all, fiction.  This is not intended to be a gritty, life on the streets, mystery/crime novel.  It is a novel, in a series, that is first and foremost about people, Lynley and his friends and relations.  It speaks to how difficult relationships can be to navigate, particularly when a crime, like murder intrudes. I have really been enjoying the series and would highly recommend it.  I would also recommend the TV series, just keep in mind that it does not stay true to the books.