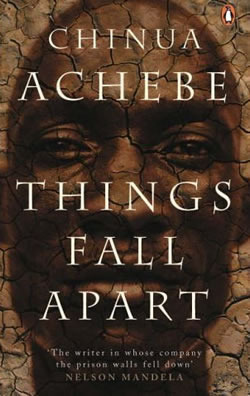 I have been seeing this title on several lists and finally picked it up.  A very short novel, under 200 pages, this was a short read, in which the setting is Africa during colonization by the British Empire. The plot surrounds the life of Okonkwo, a warrior, a self made hard working man, a brutal man, and a member of the elite in the village of Umuofia.  Okonkwo is in some ways admirable, he pulled himself up by his bootstraps in only the way that someone coming from abject poverty and the worst circumstances can, however this rise to the elite in his village has made him a brutal, cold man.  He beats his wives and his children and shows no affection outwardly, thinking that affection is a sign of weakness.

Okonkwo probably would have lived a successful, happy life in his village if he had been born 50 years earlier.  He valued the traditions of his culture and his village and wanted to maintain the status quo, unfortunately he lives in a time of change.  Change brought about by white missionaries, schools being built, and colonial goverment imposing their laws and justice on the land.  Inevitably, Okonkwo’s refusal to change leads to his downfall.

Although the book can be read as issue based literature, colonial rule in Africa, missionary work among native populations, or even the treatment of women and children in patriarical societies, I read this as a book about change.  Human beings in all kinds of circumstances need to be able to adapt to survive.  Okonkwo tries to stand against the tide of change and suffers the consequences.

One thought on “Things Fall Apart by Chinua Achebe”