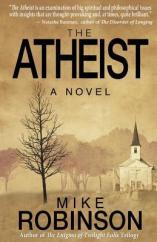 I received a free copy of The Atheist by Mike Robinson from NetGalley in exchange for a fair review.

The Atheist seemed to be a philosophical/spiritual/self-help book written as a novel.  The Atheist refers to Dr. Arthur Moore a renowned speaker and author who eschews God and religion and advocates for science and reason.  He has a near death experience and this causes him to re-examine some of his views.  Not that he specifically states he finds God, but rather that he now sees himself and everyone and everything as part of a bigger spritual entity/intelligence.  There is much discussion and introspective thoughts laid in the book.

The novel piece tells the story of Arthur the man, his strained relationship with his homosexual son and the women in his life.  His difficulty writing his current book and his interest in  current events, particularly those surround a Christian radical cult employing snipers to deal out their own brand of retribution.  His reactions to media attention and events for his books.

I did not find that the two parts (philosophical work and novel) worked well together. Arthur wasn’t  likeabe and so it was understandable that his relationships with others were awkward and strained, not because he was an atheist but rather due to poor social skills.  He acted as though he was having a mid-life crisis.  As a philospher/atheist , he came across as one of those rambling theorists who make perfect sense to themselves, but who cause everyone else’s eyes to glaze over.  I’ll admit that I ended up skimming some passages because I just  couldn’t read through it, yet felt obligated due to receiving the book from NetGalley.

I have read other philosophical leaning texts, Siddhartha, The Alchemist, Candide, etc. but I’m afraid this one was not my cup of tea.