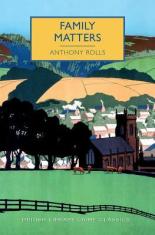 Family Matters is one of the British Library Crime Classics that I collect.  I received this one for a Mother’s Day gift.  The story concerns Robert Arther Kewdingham, a self-absorbed failure of a little man and the people in his orbit, his wife, his doctor, his relations, and neighbors.

Robert and his wife, Bertha are stuck in a horrible marriage, in which he feels entitled and self-important while she looks on in growing resentment at the reality of their situation.  There is more than one person trying to kill Robert and when he finally dies, it really is a question of who succeeded.

This is an elegantly written crime classic.  The characters are well drawn and the sense of slow suffocation that Bertha feels in her marriage and at the expectations of society are so well depicted.  She has no options, no assets of her own, no near by family support or family home to return to in desperation.  The book really excels at this female point of view, especially the sense that it is not just Robert keeping her in this prison but the female members of society in the form of his family members as well.

A very good read with an interesting twist of competing killers.  Highly recommended!

The Bookshop on the Corner by Jenny Colgan was such a fun read.  I really enjoyed the entire premise and story.  Nina is a librarian, whose library has been closed.  Finding herself without a job and surrounded by boxes and boxes of lovely books she takes a leap of faith.  She buys a van, moves to Scotland and opens up a mobile bookshop.  traveling to local communities she makes friends and builds a life for herself she could not have imagined before.  Lovely book themed romantic fiction!

Thirty-Two Going on Spinster was a total Amazon impulse buy.  I got suckered into reading the first few pages for free and then I just needed to know what happened so I had to buy the book.  Julia is 32 and still single, still living at home with her parents, and still at the same dead end boring job she has been at for 10 years.  Julia is defined by the fact that she doesn’t like change and sees herself as doomed to always be alone.  A new man enters the company and shakes things up, including Julia.  She finds herself acting out of character and although it is scary at first, she ends up embracing the changes.  This was an okay chick lit type read,.  I’m a little out of the demographic here so some it just makes me roll my eyes a little, but someone younger might enjoy it.