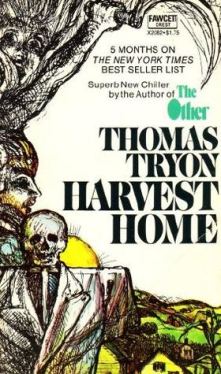 Harvest Home is an excellent example of folk horror along the lines of The Wicker Man set in America rather than England.  The protagonist, Ned, has taken his family to live in the country where he plans to pursue his new career as a painter.  The family is accepted into the rather insular New England Community, particularly  after an accident in which their daughter is saved by a local healer woman rather than modern medicine.  Ned begins to question whether everything is really as peaceful as the bucolic setting would seem to indicate.

The plot is engaging and well paced. It is easy to feel Ned’s building sense of unease at his family’s new home and neighbors.  Each piece of “evidence” or secret that Ned uncovers adds to the tension and the feelings of dread. The sense of place is well established and add to the build up of tension due to the isolation.  Ned finds the answers he has been seeking and pays a horrible price.

I have been seeing multiple recommendations on Reddit and other places for Red Rising and decided to try it even though I am not a big Science Fiction reader.  The story’s premise is based around the colonization of Mars and the society established there to achieve this end.  People are divided into groups assigned colors Red, Silver, Gold, etc.  Darrow, the protagonist is a Red, he works underground and at the beginning of the book believes he is working for the future good of his people, so that someday the colony will be established on the surface with terra forming and the like.  He works the dirty, dangerous job of mining to feed himself and his beautiful wife Eo.

It is quickly revealed the whole thing is a scam, the surface has been inhabited for centuries by the higher colors and the lower reds, such as Darrow are basically slaves.  Darrow is selected by a revolutionary group to be  modified via surgeries and chemicals to pass as gold and infiltrate their society via an elite training school.

The plot felt to me like a merging of  Riddick (the mining/underground scenes), Total Recall (bad guys keeping the poor of Mars down), Divergent (groups sorted by narrowly specified categories into duties, tests to belong to a specific group), and Hunger Games (school environment, survival of the fittest).  There was really not anything here that I haven’t seen before and I don’t read much science fiction.

If the character of Darrow was female, he would definitely be a Mary Sue.  He is just the best at everything and given his early life as an uneducated slave raised to work in a mine, it was really unrealistic.  The treatment of women in this book is just abysmal.  Eo is only there to sacrifice herself to move Darrow’s story forward.  She is a prop with no worth at all as a person. Most of the  other females are there to be raped or assaulted without consequence, not really progressive at all.

Perhaps it is just that I am not the target demographic, but I don’t really see this as worthy of all the attention and recommendations that it receives.  It just seems to have taken ideas from popular science fiction movies/books and merged them into something that will be very marketable as a screenplay.