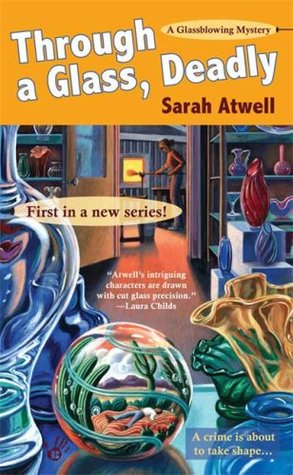 This is the group read this month for The Cozy Mystery Corner Book Club on Goodreads.  Sarah Atwell is a pen name for Sheila Connolly, who writes the County Cork series, which I adore and two other series I have not tried yet, an Orchard series and a Museum series.

This series theme is glassblowing, which I admittedly know nothing about and don’t necessarily have very much interest in to be honest.  In general I am not an artistic or crafty person at all, not really any talent in those kinds areas. When I was a kid, in about second grade, my mom told me she always knew which project was mine when it was time to visit the classroom for back to school night.  She said she just had to look for the worst one on the wall and that would be it.  I have not improved over time.

Anyway, there is a lot to like about this book, the sleuth, Emmeline or Em, is different from most cozy mystery protagonists, at least initially.  She hears the proverbial bump in the night and rather than rush headlong into danger, she actually calls 911 and waits until she hears the culprits running away before getting out of bed to investigate.  She is a successful established business woman, most cozy mysteries start the series with the sleuth beginning their business.  The setting is in Tuscon and she does make the setting important and incorporate it into the story line.  It seems to me accurate and a good sense of place, although I have not been to Tuscon so I really have no way of knowing.  Interesting comments about limited exterior lighting to prevent light pollution suggest knowledge of the area.

Her brother, Cam is also another non-traditional cozy character.  He is obviously loyal and loving to his sister, an IT worker who lives a few hours away and visits when he can.  He seems somehow naive and innocent in an interesting way.  The other secondary characters are similarly interesting.

The book is also not traditionally plotted.  There is a murder and it is pretty straightforwardly solved in about the first two thirds of the book.  Then there is a second plot related to the murder but more in the lines of a low level thriller involving kidnapping and a missing valuable object(s).  It made it a different read than the usual cozy.

The negatives are that at least for me, there is too much detail on the glass blowing.  It might just be me, I like my themes in cozies to not overwhelm the mystery plot and here I found myself skimming some of the glass blowing detail because  I couldn’t understand it anyway.  I mean I get that you have special tools and furnaces and that temperature is important, but beyond that…ehh.  The other negative is that the mystery is not enough, there needs to be more red herrings or twists if it is going to be a mystery.

The negatives might improve in later books in the series.  There are two more and then it appears that is it.  Being that the series appears to be discontinued after 3 books, I am not sure that I will continue with it, although I do like a lot about the book.