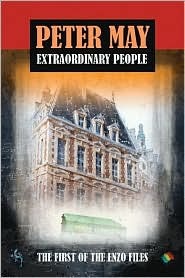 I read the entire Lewis Trilogy by Peter May and loved it, but I was hesitant to start this series because I had heard it was a completely different style to the Lewis Trilogy.  Picked it up from the library and once I started it, I could not put it down.  Yes, it is completely different from the Lewis Trilogy, no flash backs, no dark intense moodiness.  However, it is excellent in its own way.  The mystery revolves around a bet.  Enzo, our sleuth, an ex-pat Scotsman living and  teaching in France, has wagered that he could solve a cold case crime.  Enzo was a forensic expert before remarrying and relocating to France.  The case involves a renowned French scholar, Jacques Gaillard, who just completely disappeared.

The mystery involves clues planted by the devious killer(s) at the time of Jacques’ disappearance.  With the help of an assistant, his daughter and her boyfriend, a girlfriend/psychologist, and a reporter, Enzo travels the width and breadth of France uncovering clues, following false leads and backtracking.  Until he comes to a thrilling conclusion.

This was really a page turner for me, I loved Enzo and the complicated relationships he had with his daughter(s) and everyone else in his life.  The mystery and clues were very well done and indeed as remarked near the end without the internet would have been difficult if not impossible to solve.  The white board approach to solving the crime was fun and interesting, it gave insight as to how connections were being made between the clues.

I will certainly read more in this series!  Fans of the Da Vinci Code style of mystery will surely enjoy it.