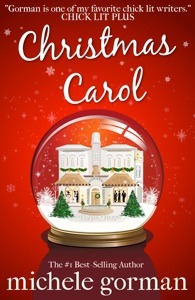 A novella that I heard about on a blog and downloaded quite cheaply from Amazon.

A delightful read, touching and heartfelt Christmas story. It was laugh out loud funny in places.   I am only sorry that it was such a short story. Very mood elevating and definitely in aid of getting into the Christmas spirit.

In one scene Carol receives a massage as a gift/bribe from her sister and she is definitely not the type of person who gets massages.  She had just laid face down on the table and the masseur whipped down her panties…

Is this a back massage or is it not a back massage?  Because she’s kneading my cheeks like they’re bread dough.  I’ve watched Mum make loaves since I was a child.  I know what happens next.  They double in size.

If you need a pick me up or are just in the mood for a Christmas romance, this book would be a good fit for you.

I read this for my English Kindle Mystery book club on Goodreads and I downloaded it for free from Amazon.    I must admit that Political Thrillers are not a genre that I read normally, so I almost hesitate to say too much about it other than some broad generalizations since some of the things I noted might be the norm within the genre.

This was a very fast paced book, which I assume was part of the thriller aspect, which was fine and kept me turning the pages, however, I found some of the transitions at that pace to be rather abrupt.  At one point, I had to reread to figure out what happened during a transition from one chapter to the next.  The characters were well developed and in my mind (as a former civil servant) very realistic.  In fact, I found the whole scenario realistic in the portrayal of corruption and the ensuing cover up.  Caroline’s family situation was a little bizarre, but  after reading the news for as long as I have been, I don’t find it terribly unrealistic.

Although I am not a big fan of political thrillers (or politics in general), I have to say that this book was very well done and I will probably read the next in the series.