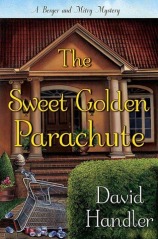 The Sweet Golden Parachute is book 5 in the Berger and Mitry series and finds them once again in the town of Dorset and on Big Sister Island dealing with the many quirky residents that make their homes there.  An aging Poochie being one of them, eccentric, wealthy and having lead a colorful life, she finds herself in the middle of a murder investigation and caught between her two children who want very different things for her and from her.  As Mitry waffles over the proposal Berger gave her at the end of the last book, she also works on solving the murder case.  Berger finds himself in an entanglement involving an unpublished book that could spark a media frenzy.  They work on their  individual predicaments and their relationship throughout the book until everything comes together in the finale.  Very good read in a fun series with interesting and real-feeling characters.

The Devil is the 8th book in the Jack Taylor series and goes in a completely different direction, the supernatural, than the other books.  The Devil of the title is the actual devil, whom Jack Taylor goes head to head with in a battle where Jack, alcoholic, drug addicted, half deaf and lame,  represents hope (a horrifying concept in and of itself) and the devil is, well the devil.  The writing, the prose itself, is as always hauntingly beautiful.  I am just not so sure how I feel about this change of course in the series.  I will have to read the next one and see.

Spiced to Death is the second in the Gourmet Detective series.  I really enjoyed the first one simply titled, The Gourmet Detective, but for some reason this fell flat for me.  There were tons of characters as our hero travels to New York to authenticate a shipment of a recently rediscovered spice.  I actually put this down a couple of times and moved on to other books before finally picking it up and finishing it.