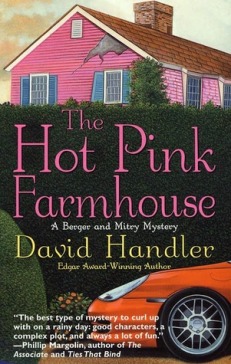 The Hot Pink Farmhouse is the second in the Berger and Mitry Mystery series, a new to me series, which I am really enjoying.  The unlikely pairing of a sometimes schlubby film critic who is most at home sitting in a darkened theater and the West Point grad high achiever works really well.  In this installment, a murder that may or may not be mistaken identity occurs and Mitry finds herself dealing with it while the whole community is in a political uproar over the change and the future.  Meanwhile, Berger has met and made friends with a renowned artist, who is involved in Mitry’s case.  Very good read in a good series.

Darkside is the second in Belinda Bauer’s Exmoor Trilogy.  I really liked the first in this set.  Stephen, the main character from the first book is mentioned briefly in this second book, but you could get away with reading this without reading the other.  In this installment, Jonas is the community policeman, who finds himself pushed to the side as a team is brought in to investigate the murders occurring in his community.  The head of the team seems to be enjoying humiliating Jonas and just in general excluding him from the case.  Jonas has other issues to deal with as well.  Meanwhile, bodies are piling up at a disconcerting rate.  This is a psychological read, like Blacklands, and it was a good read, but I thought Blacklands was much better.