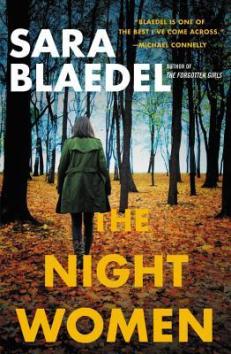 The Night Women by Sara Blaedel is the third in the Louise Rick series.  In this installment, Louise is investigating the brutal death of a woman, who not many others are concerned with because she was a prostitute.  At the same time Camilla, Louise’s reporter friend, becomes involved with the story of an abandoned baby.  As both women investigate and discuss their cases, the stories of the dead woman and the baby intertwine.  This was in some ways a very depressing read, the inescapable fate of the sex trafficked women and their lives lingered with me after the book was finished.  Well written mystery with an intelligent female protagonist at the helm.

Of Books and Bagpipes by Paige Shelton is the second book in the Scottish Bookshop Mystery series.  Delaney is dropped into a mystery  at the very beginning as a pickup for a new item for the shop goes awry when her connection is found dead.  The young man has a personal connection to Edwin, Delaney’s boss and owner of the shop, and to a circle of Edwin’s friends.  Delaney investigates with the help of her landlord Elias and her romantic interest Tom.  Exceptionally good sense of place developed here, with lots of intrigue, even among those Delaney thinks of as friends and associates.  I am enjoying this cozy mystery series set in Edinburgh.

One thought on “The Night Women & Of Books and Bagpipes”