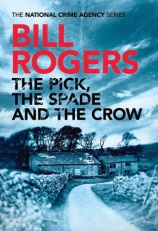 Getting ready for Season 2 of Agatha Raisin on AcornTV, I am filling in some gaps that I have in the series.  I originally read many of these out-of-order which I regret, as Agatha’s personal life is a continuing storyline from one book to the next.  Agatha Raisin and the Case of the Curious Curate picks up with Agatha in a rather low place due to the end of her marriage with James. She has a new neighbor, who enthusiastically joins in as Agatha’s sleuthing partner when the new curate is murdered and the Vicar is suspected of killing him out of jealousy.  Great story, great characters and wonderful village setting with all the attendant residents to fill in the cast.

The Pick, The Spade and The Crow was this month’s read at the Kindle English  Mystery Club on Goodreads.  This follows the story of SI Joanne Stuart new to the Behavioral Sciences Unit of a National Crime investigation agency.  Jo is caught up in an investigation that has far-reaching implications and links to numerous missing men over a period of years.  The Masons (not the stoneworkers) organization  is explored as  a part of the case. The first part of the book was slow and somewhat heavy-handed with all the introductions to the team members.  The book did pick up steam in the second half and it ended well.  The character of Jo was a strength of the book, as was the plot line.  I was unclear as the “team” because they really didn’t seem to function as one.  There is good here and it definitely improved as the book went on.

Playing for the Ashes by Elizabeth George is book 7 in the Lynley series.  This is a series that gets better as it moves along.  This book had great characterizations and managed to make even unlikable characters sympathetic.  There were no winners here as the twisting and turning events came to a rather sad conclusion, much like one would expect in real life.  I would caution readers that there are discussions of animal cruelty, which I find difficult to read and they are central to one character’s storyline.  Overall, a really good read in a series that continues to improve, with more complex plots and in-depth character development.

I’ve had A Fatal Twist of Lemon on my Kindle for quite some time and hadn’t read it.  I think I just wondered if it would be too much like Laura Child’s series, which I’ve read quite a few of and really enjoyed.  I finally started it the other night and read it straight through.  It is a delightful cozy mystery. with a strong female lead in Ellen, the proprietor of the Wisteria Tea Room.  There is also a great love interest, Detective Tony Aragon, who has a couple of chips the size of boulders on his shoulder.  I enjoyed the interactions between them.  I ended up finishing this book and immediately ordering the second in the series,  A Sprig of Blossomed Thorn, right away which was equally as engaging and fun to read.   The series does address some sensitive topics in terms of bigotry and relationship between the non-hispanic and hispanic residents of Sante Fe.  Well done, I will be reading more in this series.