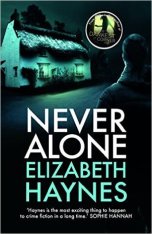 I’ve read these three in the last couple days.  Chevy Stevens wrote a book a while ago that I really liked, Still Missing, and so I was eager to try another book by her.  That Night of the title refers to the death of a teenage girl and then the story rolls forward to the release of her sister, Toni, and the sister’s boyfriend, Ryan,  from prison.  They had been convicted of the murder and now return home out on parole.  They decide to do the investigation that had never been done to find the killer and clear their own names.  There is a dark web of secrets and lies here and killer(s) that don’t care that Toni and Ryan spent 17 years in prison for a crime they didn’t commit.  The pacing is fast and Toni is a great character, who leaves the reader rooting for her all the way. I’d recommend both this and Still Missing.

Never Alone by Elizabeth Haynes is one of the reads this month at the English Kindle Mystery Club.  Sarah actually is alone.  She lives in an isolated farmhouse, her husband dead, her daughter grown and away at uni, and her son estranged.  She rents a cottage on her land to an old flame, Adrian, and the story takes off from them there.  The book includes second person perspective, which can be somewhat off-putting, but here is manages to catch the reader’s imagination and develop a sense of something being off, some inexplicable danger.  Sarah is an interesting character, a woman once successful in her career now struggling, once financially stable now sinking in morass of debt left by her husband, once a mother now with children who either don’t need her, Kitty, or don’t want her, Louis.  On top of that one of Louis’ friends continues to hang around often uninvited.

Sarah’s best friend disappears and all of a sudden  Sarah is left unsure.  Unsure of the people in her life, their motivations, even who they are.  There is an action packed conclusion that brings the book to a close.

At first,  I was really drawn into this and couldn’t put it down.  But further along once I knew who the narrator was and pretty much figured out their life story, I knew what happened to Sarah’s friend  and it made the last part just a trudge to the finish.   The red herrings just didn’t really work for me and I didn’t have any doubt as to what was going on, even before  the disappearance.  Interesting writing style and the story started off strong.  …On a side note, I really disliked the son character Louis…thought he was a right little entitled sod..

Haven was passed on to me and is not really my normal read.  An FBI/Paranormal investigation team member, returns to her home town to try to figure out what trauma she had that is keeping her from reaching her full potential.  This is book 13 in a series so the whole FBI/Paranormal unit is well established with,  I am assuming, recurring characters.

This was a fun quick read.  Nicely done twists and turns in uncovering the original crime and tracking the current villain.  I’m not a big paranormal reader, but I did enjoy it

One thought on “Haven, That Night & Never Alone”