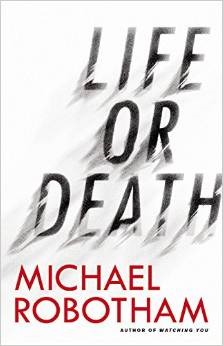 This is my second book by Michael Robotham.  This one is a stand alone novel.

What would make a man escape prison the day before he is due to be released?  This is the question that is the premise behind the book. Audie has been pretty much a model prisoner all the while tolerating attempted poisonings, stabbing, beatings and all forms of brutality. Another character raises the point later in the novel that the question shoud be with all that, why didn’t he escape sooner?  Audie was convicted of a robbery of millions of dollars and the cash was never recovered and now he is out of prison and being hunted not only by the authorities but by others as well. Audie is just trying to keep a promise.

I really enjoyed this book.  The story unfolds with views of what is currently happening and what happened to Audie in the past leading up to his imprisonment.  The characters Audie and Moss are well drawn, sympathetic characters.  As a reader, you find yourself rooting for them and eagerly turning the pages to see what happens next. The feel of the book is very similar to the film The Shawshank Redemption and fans of the movie would like this.   Highly recommended thriller.