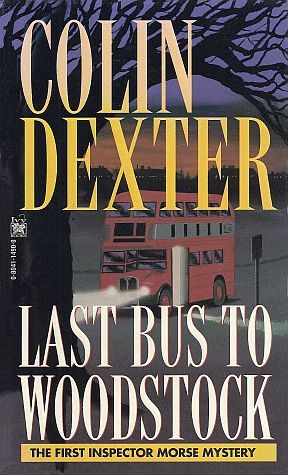 I have not read any Inspector Morse books before, however I have tried to watch the TV series.  I don’t find the TV series that engaging, Morse seems like a jerk and a flagrant womanizer.  I do love the character of Lewis though and have watched all of the Lewis TV series.  Maybe Morse’s treatment of Lewis is one of the reasons I didn’t get into watching Morse so much?

This is the first book in the series.  It involves two young women who try to hitch a ride home and one of them ends up raped and beaten to death, or is it beaten to death and raped, in a pub parking lot and the other is no where to be found.  Morse and Lewis investigate following up many leads that take them back and forth across Oxford and Woodstock.  The setting is dark and moody, a very atmospheric read and I really appreciate the creation of that type of mood in a book.  Morse is a …jerk to put it politely.  He treats Lewis abomidably and is arrogant and so sure of his own omnipotence.  Lewis is intelligent and very put upon by Inspector Morse.

One of the complaints I noted in comments about this book is the blatant sexism, almost every woman is a lying manipulative creature with no morality and a subservient type of job.   In my mind, that was a sign of the times and not a weakness of the book.  The book was simply reflecting the attitudes and cultural mores of the time it was both written in and depicts.  The plot was complicated, but in some cases unneccessarily so.  Morse keeps secrets from Lewis and the reader.  I found the most interesting character, other than Lewis, was Mrs. Crowther. She characterizes the unfulfilled housewife, a woman trapped by the social expectations of her time, who sees no way out.

My complaint was I just didn’t believe the final reveal, the motive seemed so weak and improbable given the character’s other actions and expressions of feeling in the book.  Maybe that was just me.   Anyway a good read for lover’s of classic mystery, Morse, and/or Lewis.  Just be prepared for Morse to be thoroughly (in my opinion) unlikeable.