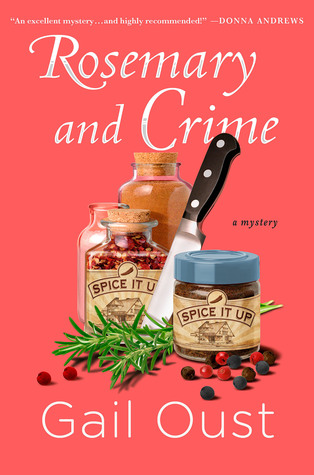 This is the first in a new series with a Spice Shop Theme.  The protagonist, Piper, is a transplanted Yankee divorcee contending with an arrogant ex-husband, a moody teenage daughter, and opening a new business, into which she has poured all her money so  it must succeed.  She stumbles across a body of a fellow business owner and the mystery begins.  Piper is a good character, reminiscent of Diane Mott Davidson’s Goldy. In fact this book reminds me very much of the style of the Goldy Bear series, so if you enjoyed that there is a good chance that you will enjoy this one as well.

Usually in theme based cozies, I get concerned with the theme overwhelming the plot, but this is the first time where I think there could have been a bit more about the spices included here.  It doesn’t seem that there was anything said about them other than you need to restock and not have old spices.   Fans of culinary cozy mysteries usually expect a recipe or two or at least hints of some kind.

Other than that the characters were interesting, there was quite a bit of humor involved.  A slight love triangle seems to develop and Piper’s relationship with her husband seems to mature slightly.  The mystery included a variety of suspects and the reader follows along as Piper investigates in an attempt to clear herself.  The mystery was brought to a satisfying conclusion.  I will be reading the next one in this series