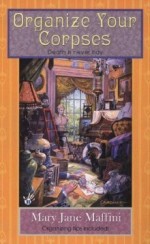 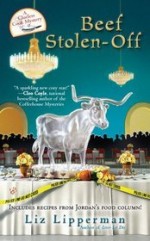 I have been looking forward to Organize Your Corpses for  a while, the theme of a professional organizer really interested me.  This cute cozy mystery did not disappoint.  The main character, Charlotte Adams, was likable and professional (for the most part).  She has enough flaws to be human and seem like a real person.  The mystery was well done with an interesting twist at the end.  Well written, with a plot that flowed at a good pace.  I look forward to reading more in this series.

Beef Stolen-off is the second book in the Clueless Cook Series.  I liked the first one enough to read this one.  There is quite a complicated plot line involving a haunted lake house, cattle rustling, a stroke victim unable to communicate something vital, and a whole slew of cowboys and cattle ranchers along with the already established characters from Jordan’s apartment building and newspaper job.  The mystery tied up neatly in the end and there was a reappearance of a love interest from the first book.  This was an okay cozy mystery, but it seemed to me that there were too many characters and it made it difficult to get invested in any of them.