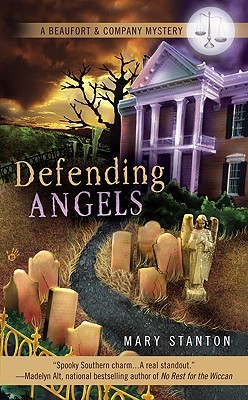 I have had this book sitting on my nightstand for a while (I was cheating and piling new books on top of it instead of below).  I purchased it at the strong recommendation of a friend and really against will.  🙂

After reading it, I have to admit it held my attention and skipped along at a pretty good pace.   I had some issues with the book but not what I would expect. There is really no “preachiness” that I thought for sure would be there. The angels are not the sickly sweet, Lifetime TV movie types so that was good as well.

If I had to characterize this, I would definitely say that it is much more of a paranormal than a cozy.  The mystery takes a back seat to the celestial beings. I don’t want to reveal too much but it is hard to discuss my issues with the book without saying something.  The protagonist, Brianna, behaves…really strangely at times and doesn’t really sleuth.  Things that should terrify and upset her don’t really and other times she is a violent rager with no real cause.  She doesn’t have concerns or ask questions that I (and any rational person) would.  This may be due to something revealed towards the end, but that was not really made clear, it is just my supposition.

My other issue is that the ending felt really rushed…We had the reveal for the story on the temporal plane, but when it came to the celestial one, it just ended quickly and with no detail.  It seemed really odd because the angel story was the main story line throughout.

I am intrigued enough that I will buy the next one and see if it resolves these issues.