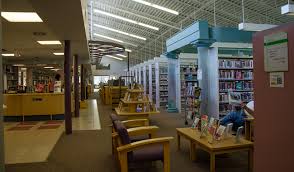 This is my local library – where I get most of my books.  The staff is great and so is the library selection.

Insomnia strikes again so I put it to good use.  Here are two more titles for the library read-a-thon.  These two are books 2 & 3 in  Lisa Bork’s Broken Vows Mystery series.

I finished For Richer, For Danger and it left off the story of the characters Jolene and Ray at such a place that I just picked up the next one and kept going.  Both of these books have good mysteries and the character’s stories are so interesting that I just wanted to know more.  Not a typical cozy in that their are some pretty devastating personal things going on that don’t necessarily end all nice and neatly (or happily).  I don’t want to give anything else away.

Besides the main characters there are some other recurring characters that we see more  of, especially Erica and Cory.  Both of them are now well developed characters with lives and stories of their own that weave with Jolene and Ray’s. The mystery is engaging and well crafted, however it is almost overshadowed by the personal crisis stuff.  In other words, rather than being a mystery with a chick lit feel, it is more of a chick lit with a mystery plot line.  I thought that it really worked well.  The only criticism that I would have to say would be Jolene’s business.  The fact that it manages to stay afloat just seem highly improbable to me, but I find that in many cozy mysteries.

The author also manages to sensitively deal with some social concerns without beating you over the head with her message.  One of the main characters is gay and openly dating, there is another character in book 3 with gender issues, and the issue of adoption/foster care is a focal point in both books.   the great thing is the normality with which the author addresses all these points.  Some books seem so self conscious and almost make a parody of social issues with their treatment.  On the whole, a well written mystery series with good character development.