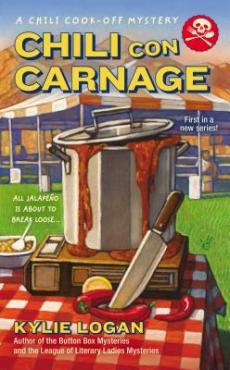 A Dark and Twisted Tide is book 4 in the Lacey Flint series.  Lacey is a great character, with a complex and “twisted” history.  This book delivers on a sense of place, with the descriptions setting the mood and atmosphere of the book.   Lacey draws the attention of a killer of young immigrant women, while at the same time Joesbury is so deep undercover there are questions of his loyalty.   There is also a side plot involving Dana and her quest for motherhood.

The novel utilizes non-linear time and multiple view points to tell the tale.  For me. this book was not as strong as others in the series as far as the mystery plot/resolution. Themes of immigration, sex based roles, and trust.  I have enjoyed the series thus far and will continue to read it.  It is important to say that this is a series which needs to be read in order, also be aware that at least one of the books has a different titles in the US and the UK.

Chili con Carnage is the first in the A Chili Cook-off Mystery by Kylie Logan.  I have liked other series by this author, in particular her Button series.  The mystery here is good and well done with elements from the past coming out to implicate someone in a present crime.  There is also an overarching mystery to be continued in future books, the protagonist’s father is missing.  I just had an issue with not liking the protagonist at all.  Immature, lazy, and selfish are just words off the top of my head to describe her.  “Who died and left you boss?” actually comes out of her mouth  as an adult woman speaking to her adult sister, multiple times in a non-ironic way.