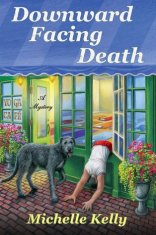 I really like yoga themed cozies, I especially liked the one set in NJ, the Mantra for Murder series and was sad to see it finish.  Downward Facing Death is the first book in a new series with a yoga and food  theme.  Keeley has returned to what she feels is home to open the vegetarian cuisine based Yoga Cafe at the site of her deceased father’s butcher shop.  She runs into some resistance especially with the discovery of a body before she is even open.  Keeley feels like she needs to solve the crime if her business is going to have any hope of getting off the ground.  I really enjoyed this mystery.  I especially liked how it showed that sometimes going home is not what you expect.  I thought that was well done.  I will read more in this series.

Simon Brett’s Fethering series has long been a favorite of mine, with rigid Carole Seddon and her more “go with the flow” neighbor Jude.  In this outing, Carole is just settling in to the idea of being a Grandma.  She gets invited to a gallery showing and goes along with Jude, although she is quite sure it is not her thing.  After the events at the gallery a young woman is dead, but is it murder or suicide?  Jude and Carole investigate uncovering secrets and dealing with a family in denial.  The usual pokes at class structure and people who suffer from self-importance are here along with an interesting mystery.  I am still enjoying this series, thirteen books in.

Death Overdue is the first in a new series called A Haunted Library Series.  The sleuth, Carrie, is a recently hired librarian in the small town which she spent summers in as a child.  Carrie has difficulty staying in one place and is itching to move on when the job becomes available.  Along with the library duties, Carrie deals with the murder of a presenter at a library program, the ghost of a former library aide, and a co-worker who wants her job.  There are lots of good ideas here, the pacing felt a little rushed and so the characters, other than Carrie don’t feel  fully developed.  Carrie is supposed to be 30, but she comes across in her thoughts and some behaviors as 18 or 19.  This may appeal to younger cozy readers, which makes sense because the author wrote YA and middle grade fiction as Marilyn Levinson.