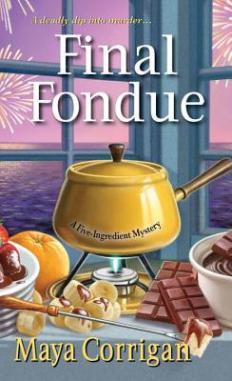 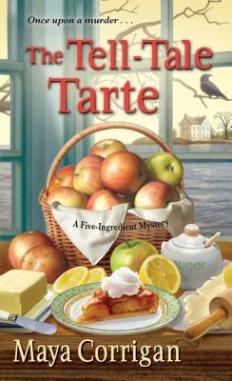 I revisited my old Fictfact account and it has reminded me of series I haven’t been back to in a while.  One of these was the A Five-Ingredient Mystery series by Maya Corrigan.  I picked up Final Fondue to continue with the series.  In this case Val’s grandfather, is perfecting his fondue into an entry for the town’s festival at the same time he is hosting paying guests in his home.  Val’s past is coming back to haunt her in the form of an angry ex-client, her old boss from the city, and her ex-fiance.  Val deals with all this and a murder in her backyard.  The relationship between Val and her grandfather is really the driving force in this series and it is shown very well here as Val helps her grandfather and he pursues and professional license.

In The Tell-Tale Tarte  a local actor dies in the street in front of Val.  She is shocked by the striking resemblance of the victim and her grandfather.  The story involves a reclusive writer, a long-lost child, threats to Val’s cafe, and her grandfather’s new investigation business.    Val is juggling many balls in this book and adds a private catering contract to the mix, in part to investigate the mystery.  The ending felt a little rushed to me, but I did enjoy the development of Val’s grandfather’s character.  It is great to see an older person being independent and spreading their wings in retirement.  He now has a newspaper column, he’s a local celebrity, and an investigator.  Fun, quick cozy mystery.