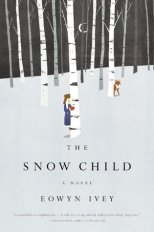 I’ve had a copy of The Snow Child for quite a while but never really felt in the right mood to read it.  This is a story of a childless couple into whose life a young child falls, only not really.  She is child of the woods and the cold and creatures.  She visits and allows them to be kind to her, but she can’t stay, not completely.  Faina, is her name, and the book follows her tale along with her quasi-adoptive parents and the man who eventually falls in love with her.  A beautiful tale of magical realism, in which hope and belief are centered.  The message is certainly “if you love something let it go…”  Very good read!

Only the Innocent is a police procedural, but not really as most of it is told from other points of view.  There is an epistolary aspect to it,  leading to the resolution of the crime and providing most of the clues.  There were some interesting pieces here but some actions of the characters were not in keeping with how they were developed,  IOW didn’t make sense in the context of the developments in the plot.  Very dark themes of child abuse, incest, grooming, rape, torture and murder. It did wrap up nicely in the end, with who I considered the obvious suspect being guilty.  This is the 1st in a new series, but I’m not entirely sure that I would read another.

How to Walk Away...the positives, the research that went into dealing with a diagnosis of paraplegia and with being a burn victim is evident here.  Very well researched on that aspect.  The negatives:   the love story  was extremely predictable and the love interest/relationship was completely, totally, unethical and as such inexcusable.  There was other practical issue that wasn’t addressed that is a huge gaping hole in the plot, but I don’t know how to discuss it without spoilers.  Hence,

Basically, fiance is a douche who maims and paralyzes her after bullying her into going up in a small plane he is piloting, WITHOUT A LICENSE, which he promptly crashes.  He then drops off the face of the earth because now she is ugly and apparently not being able to walk isn’t sexy.  The FAA findings were for pilot error and there is no law suit???  How does that happen?  She will need care and accomodations the rest of her natural life, plus all the medical bills, and they don’t sue?  No, instead they show up at his wedding to his new WALKING fiance as a way to “show him.”  What?  How does this make any kind of sense?  There is no reference to her parents being multi-millionaires, so I didn’t get this at all.  I mean this is in America, disabled without money, not a nice long term outcome.