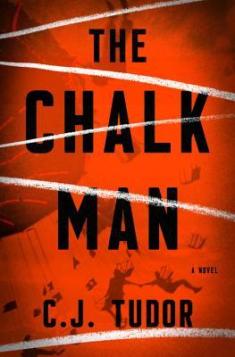 I have had The Chalk Man on my list for a while and it is next month’s read for The Kindle English Mystery Club so I picked it up from the library to be sure I read it.    It had a lovely nostalgic feel for those of us who grew up in the 80s – very Stand By Me-esque, except in a small English village.    A horrible murder is committed and a group of children are involved via chalk symbols, years later the symbols make a reappearance and cause a revisiting/investigating of the original events.  The crime is interesting and there is a great amount of suspense and twists and surprises.   The time does shift back and forth between 2016 and 1986 and there are several characters whose lives intersect at various times and events to keep track of.  There is also an element of “lucid dreaming”, which gave points of the book a fantastical feel to me.  The book also tackles themes of dementia, guilt or the appearance of it, and repentance.  Good read.

The Silkworm is the second in the Robert Galbraith series featuring Cormoran Strike, an ex-army, amputee private investigator, who finds his business quite a bit healthier after the events in the first book through business his way.  Robin is his secretary/assistance and the newest big case involves a missing temperamental writer,Owen, who unfortunately has a history of wandering off so no one is really thinking much of his latest disappearance.  Strike deals with the wife, who hires him to find the wayward writer, the agents, the publishers, and the scores of people who Owen has managed to piss off with his latest tome.  Strike has to deal with his own personal issues as his ex-girlfriend of many years is finally marrying the competition and Robin is marrying as well.    Amidst all this, other small cases of infidelity and industrial espionage wind their way across Strike’s desk.  Great read in a great series.  I am loving the development of the characters in this series!  I think fans of Kate Atkinson’s Case Histories would really like this series as well.  It has a similar feel to me.

One thought on “The Chalk Man and The Silkworm”