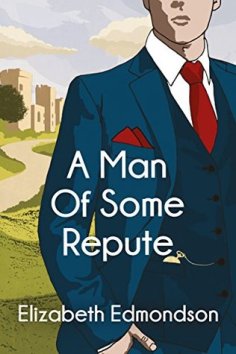 A Man of Some Repute by Elizabeth Edmondson was for me surprisingly good and fun to read.  The characters of Hugo and Georgia were engaging and well drawn.  Georgia was a good counterpoint to Hugo’s seriousness.  The novel is set after the war in one of the great country houses in England.  The house had been used by the military and now that he has an injury Hugo has been put out to pasture there or so it seems.  Soon a body is discovered and Hugo is drawn into the investigation with an eager Georgia.

The portrayal of post war estates is well done here and the plot is lively and engaging.  I really enjoyed it even though historicals are not normally my favourites.

In a Cottage in a Wood by Cass Green is this month’s bargain read at the Kindle English Mystery Club on Goodreads.  Neve’s encounter with a woman on a bridge late at night is the catalyst for exposing secrets and changing Neve’s life.  Neve’s brief experience with the Isabella  leads to Isabella leaving her “a cottage in a wood”, an isolated, dismal looking, cold cottage that is.  When Neve arrives, driven by desperate circumstances in her life and without really much of a plan, she is drawn into discovering who Isabella was and what lead to her death.  Quick, fast paced read with an engaging story line.  I will say the ending felt rushed to me but still ok.