This is the first in a new series that has somewhat of a double theme, first the dream club but then also a vintage candy store.  The protagonist’s sister, has moved to Savannah and opened a vintage candy store after a long history of beginning enterprises and discarding them relatively quickly as failures.   Taylor comes to Savannah on a temporary basis as an attempt to save the business, thus providing some long term security for her sister.

I love that this series is set in Savannah, a city where ghost stories abound.  I don’t think the premise would have worked as well in many other locations, except maybe New Orleans.  The setting is well done having recently visited Savannah myself I can picture the street where the shops are and the attempts at gentrification and expanding tourist areas.

There are interesting characters as well.  Taylor is the steady, practical business oriented sister, whilst Ali is flighty and tends to flitter from one idea to the next with no apparent plan.  The Dream Club members add some local color, particularly the elderly sisters who own the flower shop.  The “friends” from Taylor’s past add some action to the story since many of the Dream Club seem to be older women.  I do think that the characters, if they are going to be recurring will need to be fleshed out more, however this is only book one in the series.

The mystery was well done.  There were plenty of suspects and twists and turns.  I figured out the villain about the same time as Taylor so that was good.

The Dream Club theme was really intriguing and I wanted to like. it.  I just couldn’t get a sense whether the author was taking a paranormal turn and we were really to believe that one character was hopping around in others dreams or whether we were supposed to gather that it was really part manipulation and part people’s subconscious minds revealing things they had observed but maybe not consciously remembered.  I, like Taylor, go along with the second idea, however Ali is firmly in the first court.

Overall, a cute, fun cozy set in Savannah with an original theme and a well done mystery. I will read a second one when it comes out to see where the author takes the characters and the theme. 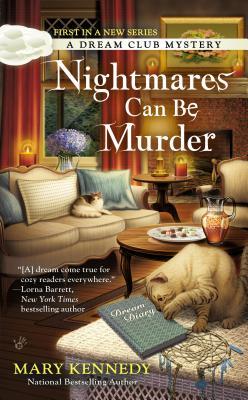