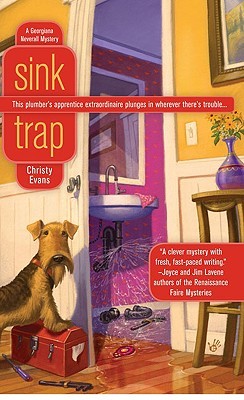 Sink Trap has been on my TBR list for a while and it was actually available from my local library so I picked it up this week.

There is a lot to like in this first of a plumbing themed cozy mystery series.  The main character, Georgiana Neverall, her mother, Sandra, her “not my boyfriend”, Wade, and boss, Barry are all good characters.  They are interesting and behave as they are drawn. The relationships between them flow naturally in conversation and are believable, (who doesn’t have moments that their mother drives them nuts?)  The plumbing theme is not overwhelming but the pieces included are interesting, at least to me.  The book is well written as far as voice and tone for a cozy mystery.

The issue is that it is patently obvious almost from the beginning of the mystery, when Georgiana finds the brooch of Ms. Tepper in the sink trap, who the villains are and basically why they did it.  The rest of the book is spent with the sleuth leading the readers around as she chases red herrings and tires to convince others that a crime has actually been committed.  She lets her feelings of animosity towards certain characters drive her investigation rather than looking at what is actually happening. In fact, she doesn’t really solve the mystery, the reveal is more that the killer(s) come out.

There is enough enjoyable here with the characters and the setting that I will probably give another in the series a try.