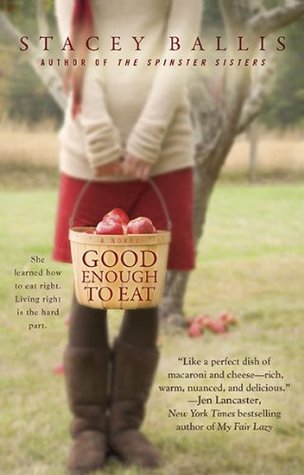 Picked up this one from the library and really enjoyed it.  If I had to classify it, I would call it more women’s fiction, however there is some romance in it.  Melanie, the protagonist, has lost a lot of weight, basically a whole other person.  On top of that she has changed careers, giving up the law for a healthy eating food business and just as she is feeling the success of these positive changes her husband leaves her.  The fact that he left her for a heavier woman and a woman who was her friend just added salt to the wound.

This could have been a very typical “fat girl gets thin, finds love, lives happily ever after”, however it is not.  The author does a great job showing that the weight is not the defining feature of Melanie, there is so much more to her, and any person than his or her body size.  The supporting characters, Kai, Phil, Nadia and Nate all have interesting lives and are well fleshed out.  The intersection of this particular group of people is believable and works with the plot of the story.

The treatment of food addiction/comfort eating/unhealthy relationship with food is well done.  Food is a really difficult addiction to live with and conquer, mainly because you can’t just go cold turkey on it 🙂 and it is not a very sympathy inducing addiction.  This struggle is really brought to life well through Melanie, her actions and reactions and her relationship and conversations with her nutritionist, Carey.  As someone who struggles with my own weight, I could so relate to Melanie’s feelings and experiences and they rang very true to me.

I loved the ending…I won’t give it away but definitely not typical.  Highly recommended read!

I picked up this one at my local second hand book seller.  I hadn’t heard anything about it but the cover and title intrigued me.

Jimi Plain is a technical writer and a single mother of 2 girls.  She has an ex, who is the girls’ father.  He is active “off screen” through broken promises and phone calls interwoven in the story.  Danny is her policeman cousin and Nell is her Grandmother.  At the beginning of the book, Jimi is moving her girls into the house with Danny and Nell somewhat regretfully but financially necessary.  Other characters include Linda, a good friend and neighbor in the middle of a divorce, and Audrey, a nun and counselor, who runs a divorce recovery group.  Although Audrey is a main character, and Nell and Danny both are regular church goers,  the story line is not preachy or full of religious references or moral “lessons”.

The Divorce group is at the center of the murders and the plot twists and turns.  The character of Jimi was interesting and sympathetic.  The other members of the divorce group seemed to me to represent the gamut of reactions to divorce and were very well done.  Jimi’s girls also gave realistic faces to teen children of divorce.  The representations of divorce and the impacts not only on the couple divorcing but others around them were particularly well done.

There were many intersections in the relationships among the characters and this led to red herrings in the mystery plot line. I did figure out the culprit at chapter 25 out of 35, however there was one piece I was wrong about and I did doubt myself a little bit so the book was still very engaging and the twist right at the end was unexpected.

A warning, simply because many cozy readers don’t like cursing at all, there are about two instances of cursing in the book but no sex.  That is a non-issue for me, but I do know that some readers expect their cozies to be clean.

I enjoyed this book and would read another in the series.  I am glad to have stumbled across it.