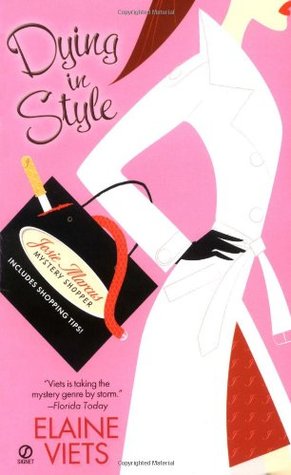 This book was this month’s read for the Cozy Mystery Corner Group on Goodreads.  I was pleasantly surprised by this cozy.  Sometimes fashion themed cozies are filled with shallow brand name dropping characters, but this was not like that at all.  Josie is a single mom, who works as a mystery shopper to support herself and her daughter.  She carries out her job wearing a series of costumes to fit in with the nature of each of her jobs.  The descriptions of how she gets into character are quite funny.

She gets involved in a series of murders related to poor reviews she gives a designer store that is in financial trouble and slated for a takeover.  The police suspect Josie of the murder and she begins to investigate in order to clear her own name.  Josie at times seems to charge headlong into danger without much of a plan, but on the whole she is a likable character.  Her mother, Jane, her daughter, Amelia and her friend, Alyce, are interesting sidekicks.  Jane’s plot line is particularly interesting and timely.

I really enjoyed this cozy and will be interested to see how the characters grow and change throughout the series.