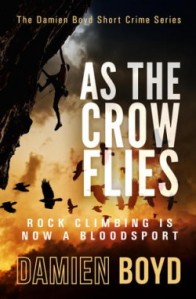 Sitting home with a leg in a cast has at least let me do some reading!  Both of these were this month’s selections from book clubs.

As the Crow Flies is the selection for the Kindle English Mystery Club on Goodreads for the month of April.  This is the first book in which we meet DI Dixon.  DI Dixon has relocated from a more prestigious posting to a small outpost, much to the dismay of his family and the confusion of his new colleagues.  DI Dixon is a former rock climber and rock climbing is the back drop for this thriller.

Dixon is called to investigate a death of a former rock climbing partner, Jake, by Jake’s parents. The opening scene of the book is actually Jake’s death in a tremendous fall.   The first few paragraphs worried me a little because of all the climbing jargon.  I wondered if I would be able to read it, but it was pretty easy to catch on to and the pace of the book swept me along.

The mystery takes a few twists and turns and several probable theories of the crime are put forth.  Dixon is an intelligent sleuth, who manages to be smarter than most of those around him but does not come across as arrogant about it.  As a reader, I can understand his family’s dismay at his apparently throwing away his shot at a more promising career for life in “the slow lane”.  On the way to solving the main mystery, Jake’s death, there are other cases that may or may not be connected and that Dixon tackles proving his worth as a sleuth.

Very fast paced mystery making for a quick read. It definitely kept me turning the pages.  My only critique is that the book is too short, I got to the end too quickly.  However, better a little  short than stuffed with unneeded filler.

Uncommon Grounds is the selection for the Cozy Mystery Corner Group on Goodreads.  This is the first in a cozy series based around a coffee shop.  Maggy Thompson, partner in a coffee shop venture to the murder victim Patricia Harper, takes her turn as a sleuth to solve Patricia’s death.

I read another coffee shop based mystery, Cleo Coyle’s Coffee House Mystery series and could not help making comparisons between the two. Unfortunately  Uncommon Grounds comes out the loser in this comparison. Maggy is no Clare Cosi.  In fact, Maggy seems to have entered into a business venture with someone she knows very little about or is just woefully uninformed and didn’t care to investigate.  Wouldn’t the fact that your new business partner was the member of some cult like church be of concern to the average person?

I will just leave it with this book didn’t work for me.