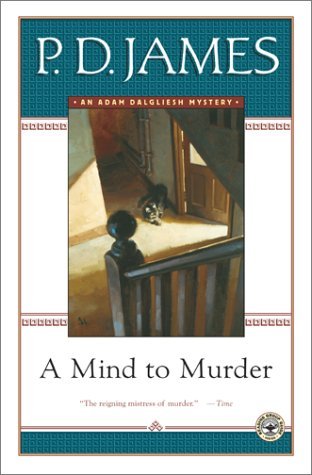 I have felt for some time that as a mystery fan I really should have read some P.D. James, being that she is such a prolific and well respected mystery writer.  I picked up this one at my local book shop to give it a try.

I really liked the character of Dalgliesh, the sleuth.  Organized and intelligent are words that come to mind to describe him.  The other characters though, come across a little flat.  The only one I really cared about we only get to know through other’s perspectives because she dies at the beginning of the book, spurring the entire mystery.  It is a sort of twist that although the murder takes place in a psychiatric ward, none of the patients are suspects, only the staff.

As par for the course in mysteries there is some misdirection in the book, intended to mislead the reader.  My issue was that the
“red herring” plot actually worked better than the actual resolution, at least for me.

Based on this book alone, I don’t know if I would read more in the series, but given that  PD James is such an iconic mystery writer I feel that I should give a couple more a chance before I make a decision to give up on this series.