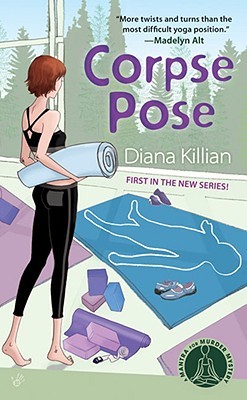 Ordered this cozy while waiting for another yoga based cozy, Murder Strikes a Pose, to come in to my local indie bookshop.

I was looking for a break from the many book store/library and cat based cozies that I read.  I love them, but sometimes they start to run together in my head :).  I am not a crafty person so many of the craft cozies don’t really appeal to me, but the yoga theme really got my attention.

This cozy was very good. I ordered the next in the series already.  The opening starts with a murder (off screen) of AJ’s beloved aunt.  The murder brings her home to New Jersey as her aunt’s next of kin and heir to a yoga based empire.  AJ is a free lance PR person living in Manhatten and recently divorced and not doing well in her personal or professional life.  Her husband left her for a man and she is really feeling the sting.

I thought the mystery plot was pretty good. I liked the characters of AJ and her mother Elysia.  The characters were well done and I really liked the inclusion of Lily as I have had the misfortune to meet a yoga teacher like her so that character struck me as particularly “real”. I actually found that the yoga theme doesn’t overwhelm the story, so if a reader is not a yoga practitioner they can still enjoy this book.  There is a love interest in the form of Detective Oberlin.  I actually think the romantic elements and AJ being able to step in right back into yoga after years away were weak parts in the book.  I don’t want to discuss specifics because I can’t really do that without a spoiler so I’ll just leave it alone.

Overall, I liked AJ, the theme and the mystery, so I will definitely read the next one in the series.  I think this series may be finished because there are only four books published and the last one was in 2011.