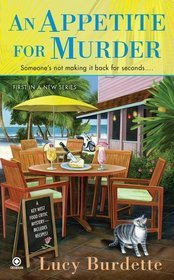 Spent a lovely afternoon window shopping, then had lunch with a couple generous glasses of sangria, and then finally settled down and read An Appetite for Murder.  This cozy has a food related theme but this time the sleuth is a wanna be food critic, Haley Snow.

Haley becomes embroiled in the murder when the police suspect her in the death of her ex-boyfriend’s new girlfriend.  Haley investigates as no one else seems inclined to do much investigating now that the fingers are pointed firmly at her.  Along with investigating the murder, Haley is also competing for a coveted food critic job in a new local magazine.  The character was well developed and I love that she was from Jersey, where I live now.  There is a varied cast of supporting characters, who will probably continue to be featured in the series.

The mystery was interesting and although I knew one piece before the reveal, I didn’t figure it all out.  I liked the twists and turns and the local color in the story.  Very good start to a series.  I will definitely read more.