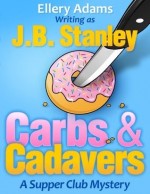 Three more cozy mysteries that I finished last night and early this morning.  I picked up all three of them at my independent local book seller, Booktrader of Hamilton.  I am sort of participating in the 24 hour readathon hosted by Brianna’s Bookish Confessions.  I jumped in last minute and just grabbed a pile off of my TBR stack.

I had read a wine oriented cozy a while ago and I picked this one:  Murder Uncorked up because I thought that it was in the same series, but I don’t think so.  This was one of those OK reads, difficult to write about because everything was okay.  I did enjoy the information about  food and wine pairing, but I didn’t really “get” the protagonist or the romantic lead.  Sometimes I wasn’t sure if their behavior was supposed to be comedic, as in romantic comedy??  This book did read more like a romance than a mystery.  I am not sure if I would read another in the series.

I had wanted to read Working Stiff for a while, it was recommended highly on a couple of cozy mystery boards and blogs.  This was the first in a series and as usual there was time spent drawing the characters, the relationships and the settings in preparation for the rest of the series.  I liked this one enough that I will definitely try another in the series.  You do need to suspend your belief to a certain extent over the whole, “I was an O.R. nurse and I quit with no notice when I caught my surgeon husband with the HEAD nurse and got hired to be an Deputy Coroner with no forensic training just because I know the Coroner”… ok.

My favorite of the three by far was Carbs & Cadavers.  Loved Professor Henry James and his Flab Five crew.  The book was well written and the characters were fun and interesting (no stereotypes here).   The mystery was well crafted and had a nice twist near to the end.  There is a slight hint of  romance, but nothing that overwhelms the mystery.  I do like my mysteries with some romance, but not at the expense of everything else.  The supper club theme was fun and I look forward to seeing how it continues.  I didn’t find out until I was done that J.B. Stanley is another pseudonym for Ellery Adams, whose Charmed Pie Shoppe mysteries I like.