I received a free copy of this title from NetGalley in exchange for a fair review.

In Read and Buried, we find ourselves back at the beloved Lighthouse library which is in the midst of some needed restoration work.  The restoration work uncovers a hidden box from the Civil War era.  Everyone is chomping at the bit to examine the contents and figure out what they mean, is it a treasure map? a diary? a coded message? important documents from the war time?  One of the members of the historical society ends up dead and that makes deciphering the contents of the box even more urgent.

Lucy works to solve the case with her cat Charlie,  her boyfriend, the Mayor of the town, Connor, and  several of the other recurring characters from the series including her sometime nemesis, Louise Jane.  There are more than a handful of suspects here and it is definitely an interesting case with ties to an artifact from the past.  A fast paced cozy mystery with wonderful setting of a Library in a Lighthouse on the Outer Banks. 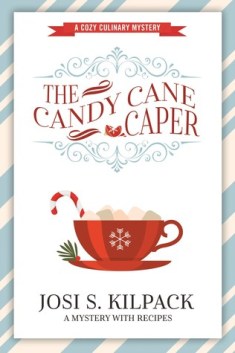 I received both of these titles in exchange for fair reviews from NetGalley.

The Candy Cane Caper is the 13th book in the A Culinary Mystery Series by Josi S. Kipack.  I have not read any of the previous books, but I found that I was able to pick up and enjoy this book without the benefit of the knowing all the backstory of the family and the town.  Sadie is a former private detective and a baker, who is preparing for the holiday season.  As part of her preparations, she is visiting a friend in a nursing home, who happens to own a very rare collection of ornaments.  When some of the ornaments go missing, Sadie puts herself on the case to retrieve them to give her friend one final joyous holiday.  An unusual mystery in that the central crime is theft, not murder.  There are plenty of suspects and clues and it is an intriguing case.  Well paced cozy mystery with a fun holiday theme.

So the Doves involves a journalist called back to the area where his mother lives to report on a body that has been discovered.  The body’s discovery is initially thought to have some political implications or perhaps be linked to a missing policeman.  As Marcus has returned to the scene of his youth, the story alternates between present day, and 1989, when Marcus was a child expelled from his posh school and the disappearance of his friend, Melanie.

The child Marcus and the story line told through his eyes is a little naive or vague, I suppose it is to highlight that our memories from childhood are not exactly as things really were.  Perhaps we don’t really understand every thing that was really happening around us and as such our recall was not accurate and our judgement of events can be called into question.  The modern day story involves Marcus’s career and his big expose that has been cast into doubt.  It also concerns his relationship with his mother and his relationships in general.  I don’t really want to say anything more because this is a layered book with the reader needing to make inferences and connections as they go along.  The themes explored most obviously throughout are memory, guilt, shame, and secrets.