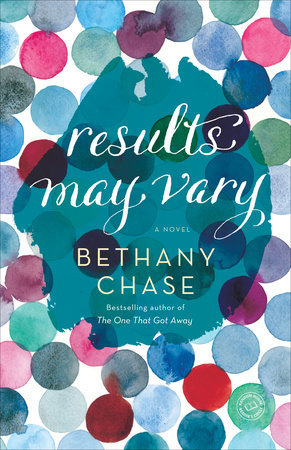 Results May Vary is a women’s fiction book mainly about dealing with the fall out of infidelity when a wife discovers her husband has been cheating with a man not another woman.  I enjoyed parts of  the story although I will say it was an uneven treatment.  The author seems to be trying to drive home the message that it is about not really knowing who your spouse is rather than the particulars of the infidelity itself.  The violation of trust is the bigger deal than the physical acts and these are  truths I can get behind.  (Basically her husband, Adam is a Liar McLiarson who lies and then lies some more, trying to cover it all it with really pretty words because he is, after all, a writer.)   Some of this works fine and then other times it steers off course.

Where the book seems to lose credibility for me, is in the actually legalities and finances of divorce.   Caroline is a small museum curator living in a really expensive area  and yet finances don’t seem to be a concern as she floats along through her separation period, files for divorce, thinks about the future, etc.  This is a far cry for me from what most people I know go through in a divorce.  Even in her whole ruminations about “what do I do now”, finances are never a concern.  It is a point that makes her a hard to feel sympathy for character, she is so far removed from the concerns of us mere mortals.  As far as women’s fiction infidelity read it was ok.