Just finished Denise Mina’s , Exile, book 2 in the Garnethill Trilogy.  I did enjoy book 1, Garnethill, however this book was much better!  Maureen’s character is in a self-destructive post-traumatic stress downward spiral fueled mainly by alcohol.  She is investigating a murder at the request of her friend Leslie, who is not much less of a mess.  A woman has been brutally tortured and murdered with her body dumped.  She was recently a resident at a battered woman’s shelter, so all fingers point toward the husband, Jimmy, who is the only surviving parent for their 4 small boys.  Only things are not what they seem and Maureen through her alcohol induced haze and her desire to maintain her friendship with Leslie seeks to prove that Jimmy didn’t kill his wife.

The characters are what makes this work stand out.  Denise Mina has crafted incredibly human characters with all the dirt and despair that one could stand to read.   Maureen is a walking train wreck, yet in this book she comes across as more intelligent, not just crafty in the way of many street survivors, but also analytical.  Jimmy is a portrait of despair and a born victim.  Even Winnie, in her own alcohol fueled rages, is a fully developed character.

Liam and Vik are some of the only positive characters in the book.  Liam has made great strides to pull himself out of his past.  Vik is strong enough to insist that he deserves to be treated right by Maureen.  There are still differences between these two:  Liam wants to save or protect Maureen, while Vik wants her to save herself.  After the ending of this book, I will be interested to see what happens here.

The mystery is well done  with great twists and turns and an ending that I did not see coming.  There is a great sense of place in this book, even though most of the places are nowhere the reader would want to be.

Great read!  I can’t wait to read the third one. 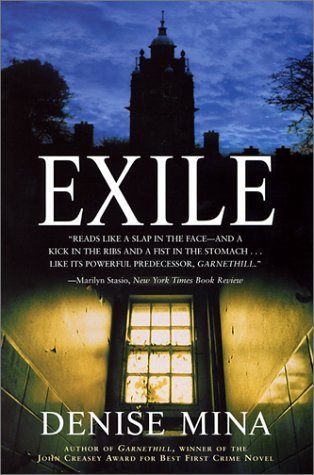